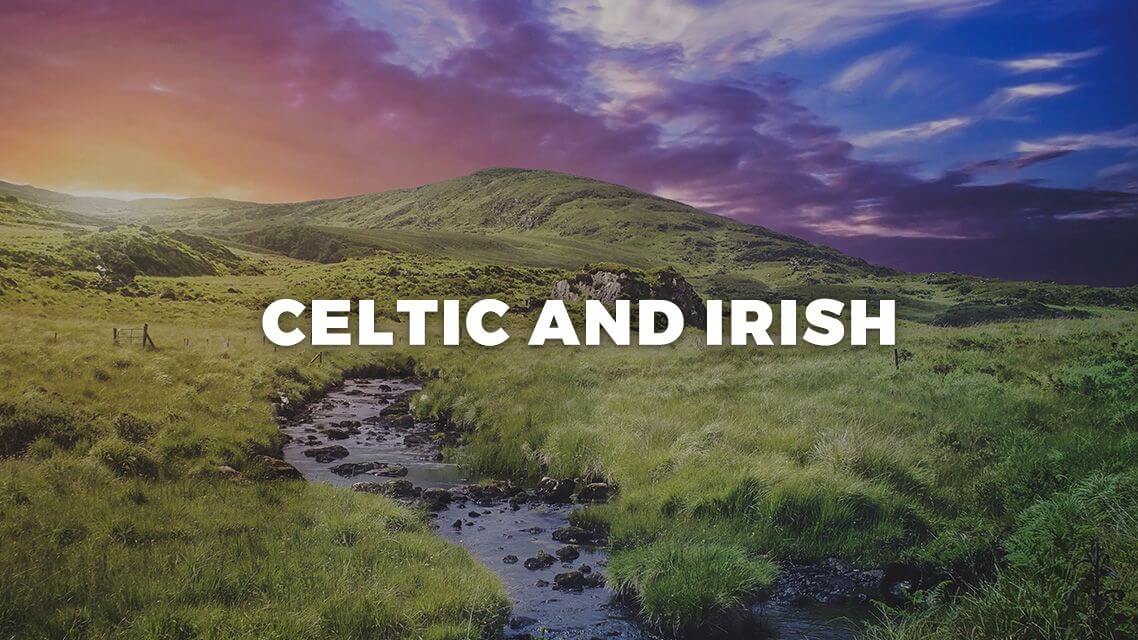 Our Celtic and Irish music is a collection of folk music inspired by the traditional music and instruments from both Scotland and Ireland as these regions of the UK are where modern day Celts reside.

Celtic music defines a wide range of musical compositions that may have originated from different places across Western Europe, including Scotland, Ireland, and Wales. The term “Celt” has often been used to describe the native people of these countries and that is how their music came to be known as Celtic music. Popularized as a type of Irish folk music, this type of music today can be heard not only in Scotland, Ireland, and Wales but also across the globe including places like Spain, the United States, and the United Kingdom. Many places have seen very large Celtic music revivals spawning several different festivals including places like the Isle of Man.

A common form performance of Irish and Celtic music is a Cèilidh. A traditional Scottish or Irish social gathering. In its most basic form, it simply means a social visit. In contemporary usage, it usually involves dancing and playing Gaelic folk music, either at a house party or a larger concert at a social hall or other community gathering place. The music is often celebratory, positive and feel good.

Traditional Celtic and Irish Instruments include:

The fiddle is the mainstay of most Celtic and Irish music. The instrument is exactly the same as a violin; fiddle is simply the term used in traditional music.

Flutes of one sort or another have been played in the Celtic countries for over a thousand years. The kind in use today is mainly the 'simple-system' flute with six holes and up to eight keys. This became popular in Ireland during the nineteenth century, when classical musicians were abandoning them for the new Boehm-system flute. Modern traditional flutes are usually copies of these early instruments, and almost always made of wood. Their cylindrical bore and wooden construction give a hollow, airy tone, softer than the classical flutes and much smoother than the tin whistle.

The simplest and cheapest of traditional instruments, yet not so simple to master. The tin whistle is a simple metal tube, with six holes and a mouthpiece like a recorder, and a range of about two octaves.

Several forms of bagpipe are used in Celtic music. The basic instrument has a bag of air, inflated by blowing through a blowpipe. Arm pressure on the bag sends air through a reed on a fingered chanter which makes the sound. The usual range is about two octaves.

The Scottish highland pipes are the loudest, played standing, usually in pipe bands. The chanter has eight holes and plays a distinctive 'pipe scale'. There are two tenor drones, tuned an octave below the chanter and a bass drone a further octave down. The Irish Warpipes are similar, but have only one tenor drone.

More popular in Ireland, and a lot quieter are the bellows-powered uilleann pipes. The chanter has a range of two octaves (in the key of D), often has keys, and in addition to drones (three or four), the uilleann pipes have regulators, extra pipes which can play certain chords. A 'practice set' is often used, which has a chanter but no drones or regulators.

In Northumberland (England), the Northumbrian small pipes are similar, with a variable number of keys and up to five drones. They are unique in having being able to cut off air to the chanter; all other pipes have to play continuously.

In Brittany they play the binou, which has seven-holed chanter and a single drone. In the celtic regions of Spain, Asturias and Galicia, the local bagpipe is the gaita, similar to the Scottish pipes, with a 1-3 drones (usually 2; tuning is 2 octaves below the chanter, one octave below and the same octave). The usual key is C, with about a two octave range.

This is a small oboe-like shawm with a penetrating sound, used widely in Breton music. It is fingered like a tin whistle with an extra hole to allow one note below the stated key (usually B flat, sometimes C or D). It is often played in duet with the binou, whose chanter plays an octave above it and whose drone is an octave below. The bombarde is usually played for only part of the tune, giving the player time to relax from the very high breath pressure required to play the instrument.

This family of instruments was developed in the early nineteenth century. They all work on the same principle: air is blown across a set of paired metal reeds, causing them to vibrate and produce a particular note. All but the harmonica are powered by bellows pulled in and out by the arms (hence 'squeeze box'). The two reeds of a pair are placed in opposite directions, so each is vibrated by either the press or the draw (in or out) of the bellows. 'Single-action' instruments have the pairs tuned a tone apart, so the one key will produce two adjacent notes depending on whether the player is pressing or drawing. 'Double-action' accordions have the reed pairs tuned in unison, so one key produces one note.

The melodeon is a simple single-action accordion. It has ten keys, giving a twenty-note diatonic range, usually pitched in C. It also has two bass keys, which give the chords of the tonic and dominant keys.

The button accordion has a second row of keys, tuned a semitone above the first set, giving a fully chromatic instrument. The most popular kind is tuned to B/C, though C/C#, C#/D and D/D# are also played. Traditional music is mostly diatonic, so the second set of keys is used mainly for ornamentation such as rolls. It also has extended bases.

The piano accordion has a piano keyboard on the left and an extensive bass keyboard on the right hand. It is a double-action instrument (same note on press and draw) and much larger than the button accordion. It is most popular in Scotland and is also widely used in central European folk music.

The concertina is a small, hexagonal accordion, which comes in both double-action chromatic ('English') and single-action diatonic ('Anglo' or 'German') forms. The most common form for traditional music is an Anglo, tuned to C and G, which has the keyboard is spread out on both ends of the bellows (usually two rows of five keys on either end) with no bass. The stronghold of concertina playing has been in Co. Clare, where it is particularly common among women players.

The American five-string banjo came to Ireland in the nineteenth century, losing one string along the way. It became popular in Ceili bands and in ballad groups. The banjo most used in Irish music is a 4-string tenor banjo, with the standard strings replaced by heavier ones, tunes to GDAE.

These fretted instruments are mostly used in accompaniment and for rhythmic backing. The guitar comes in from the folk boom of the sixties, and is usually a standard acoustic six-string model, though a variety of tunings can be used. A wide variety of instruments come under the general umbrella of the mandolin family. These have a rounded back and usually four pairs of strings (courses) tuned in unison. The mandolin is usually tuned like a fiddle. Larger versions include the mandola (tuned a fifth below) and the mandocello (an octave below). The mandocello is also known as the octave mandolin and is similar to what is known as the Irish bouzouki - a much modified version of the Greek bouzouki, introduced to Irish music by Johnny Moynihan, in his Sweeney's men days in the late sixties, and now almost a standard in Irish groups. Bouzouki tuning is usually GDAD or GDAE. There are several other variants, including the five course citterns developed by Stefan Sobell (with the name borrowed from a medieval family of instruments) and various hybrids such as Andy Irvine's 'bizarre' (bouzouki-guitar).

There have been harping traditions in the Celtic countries of Ireland, Scotland, Wales and Brittany for hundreds of years and in Ireland at least it was closely tied to the old aristocracy and 'high' culture. Most celtic harps are small, and can be played on the knee. The Scottish harp is called a clarsach, and the Welsh harp is the triple-harp, a form once popular in art music until superseded by the pedal harp. The triple has three rows of strings, tuned a semitone apart to give a chromatic scale. Most modern players use nylon or gut strings, but some have gone back to the original wire-strung harp, with its bell-like sound.

This is a kind of zither, a trapezoidal board with pairs of strings stretched over it, played with light hammers. It is common to many folk traditions. The sound is similar to that of the harp.

This is a goatskin drum used widely in Irish music and also becoming popular in other Celtic areas. For loads more information, jump to Josh Mittleman's excellent Bodhrán pages.

Sample our Celtic and Irish music below, or jump straight to the category.

Slow, majestic Celtic and Irish music with a warm hint of nostalgia, scenery.

Come By The Hills

Slow, poignant and thoughtful Celtic and Irish music with a majestic, scenic and inspiring theme.

Goat On The Green

Slow, majestic and elegant Irish and Celtic music with a scenic, inspiring and thoughtful feel.

Warm and romantic Celtic and Irish serenade with a gentle, and elegant melody.

Happy, jolly and carefree Celtic and Irish track with a positive, celebratory feel.